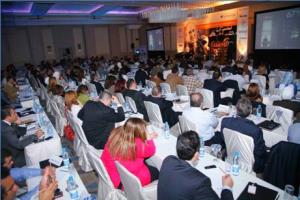 Hosted by Optimiza Academy and The Drucker Institute

Amman, April 2009 – Optimiza Academy – A subsidiary of Al-Faris National Investments Company (ASE:CEBC), in cooperation with the Drucker Institute of the Claremont Graduate University – USA, hosted the “Essential Drucker for the 21st Century” symposium at the Amman Grand Hyatt Hotel. The symposium, the first of its kind in the MENA region, aimed at introducing and discussing the principles of modern management in light of the current world economic crisis, according to the methodologies of “the man who invented management”; the late Peter Drucker.

The symposium witnessed high level participation from Jordan and many MENA countries including Saudi Arabia, Kuwait, UAE, Palestine, Sudan and Libya. The 220 attendees included former ministers and secretary generals, senior managers and CEOs as well as top executives and business leaders from both the private and public sectors.
The four pillars of Drucker’s thinking: values, innovation, people and effectiveness, and methodologies concerning management best practices in various areas and under different circumstances, were introduced and discussed during the symposium. Peter Drucker had published 39 books and thousands of articles before his demise in 2005. His methodologies have positively impacted the working communities and his insights on knowledge work, strategy, responsibility and management techniques are still followed in today’s ever-changing business world.

Mr. Rick Wartzman, Executive Director of the Drucker Institute commented on this event by saying: “The vision of Mr. Hazem Malhas – CEO of Al-Faris National Investments Company – on enhancing the knowledge skills of the workers and management in the MENA region, goes hand in hand with the partnership the Drucker Institute is forming with Optimiza Academy. The Academy has tremendous knowledge, great reach and is highly effective in human capital development on a regional level, and we look forward to organizing a series of programs throughout the MENA region that will help stimulate effective management, social responsibility and knowledge worker productivity.”

On the other hand, Mr. Nidal Bitar, CEO of Optimiza Academy, remarked: “I am pleased with this distinguished participation and great interest in Drucker’s science, which reflects the various managements’ ambitions in raising the human capabilities to higher levels in the MENA region.” Mr. Bitar added: “Optimiza Academy’s strategic partnership with the Drucker Institute reflects the academy’s desire to cater for the huge need to sharpen the management and leadership skills in this region, especially right now. Implementing best practices and success stories inspired from Peter Drucker’s knowledge, as well as other intellectuals the academy had previously hosted such as Dr. Steven Covey, add great value to our efforts.”

About (Optimiza Academy):
Optimiza Academy is a B2B human capital development solutions provider dedicated to building a professional, efficient and effective workforce for its customers in the MENA region by designing and executing state-of-the-art integrated training solutions and consulting services in business, management & ICT. Optimiza Academy is fully owned by Al-Faris National Investments, a publicly-listed IT company (ASE:CEBC) with a capital of US $48 million.

With more than 50 world-class, certified trainers and practitioners, organizations can rely on Optimiza Academy to successfully deliver customized, objective-oriented training solutions with internationally recognized certification in 2 major fields: Business & Management and IT & Desktop Applications Training.
Optimiza Academy training methodology is based on the ADDIE model, which offers dynamic, flexible guidelines for every organization to incorporate lessons learned and enhance organizational benefits and efficiency.