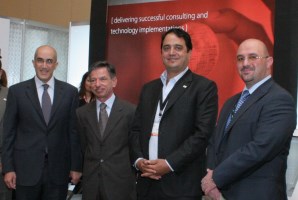 Optimiza’s sponsorship and participation in both the conference and exhibition stems from Optimiza’s strong belief in the integral roles that both the media and ICT sectors play in elevating cultural excellence. It also highlights Optimiza’s active participation in the ongoing drive towards economic development and awareness of the latest technologies in the realm of IT solutions and applications.

In this unique event, Optimiza’s participation materialized through Dr. Wassef Masri, General Manager of Optimiza Jordan’s presentation, in which he shed light on aspects related to banking services available through mobile phones – “Mobile Banking”, whereby such services may allow for a significant increase in the potential returns for both the banking and telecom sectors on the one hand, and increase customer satisfaction for users of such services through better quality on the other.

Dr. Masri further iterated Optimiza’s deep interest in investing in the telecom sector, not only on a local level but regionally as well. This represents an extension of Optimiza’s vision of taking a leading role in bridging the gap between the financial and telecom services sectors in the Middle East. Moreover, Dr. Masri reverted to real life examples offered by Optimiza related to the ICT field, such as the consultancy and management services it provides, in addition to technological advances such as modern solutions and varied infrastructure services.
The conference hosted 460 delegates from 25 countries representing 144 leading media organizations, telecom operators and other telecom specialized companies. The participants discussed methods of collaboration and convergence between the respective sectors, alongside the opportunities that should be utilized to ensure further success and development of the sector at large.

On his part Mr. Jawad Abbasi, Founder and General Manager of the Arab Advisors Group, expressed great pleasure in this event which represented a true opportunity where prominent figures and leading companies from all over the region were able to congregate in order to bolster ties, and build on the success of previous conferences, in the hopes of creating new business opportunities in the ICT sector
-Ends-

The Arab Advisors Group’s team of analysts in the region has already produced close to 1,100 reports on the Arab World’s communications and media markets. The reports can be purchased individually or received through an annual subscription to Arab Advisors Group’s (www.arabadvisors.com) Strategic Research Services (Media and Telecom). To date, Arab Advisors Group has served over 480 global and regional companies