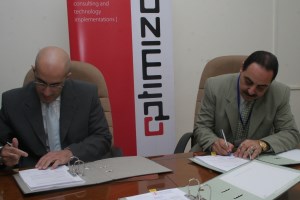 By virtue of this agreement, Optimiza will provide around 1,148 MoE schools nationwide with more than 8,597 computers, projectors, printers and scanners, in addition to Nexans networking products and infrastructure. The delivery and implementation of all these equipments are expected to be finalized by September 2008.

HE the Minister of Education, Dr. Tayseer Al-Nueimi confirmed that this project comes as a continuation of a series of previous projects, which the MoE had undertaken within its overall strategic plan to spread IT in all the Kingdom’s schools, especially the underprivileged ones. It also falls in line with HM King Abdullah II’s vision to improve the educational system and IT infrastructure in the Kingdom’s schools through preparing the students to enter the labor market equipped with the relevant and needed IT skills and competencies.

On this occasion, Dr. Al Masri commented on this initiative by saying, “We feel extremely pleased with our continuous cooperation with the MoE. This national project supports the schools’ noble mission to foster promising generations knowledgeable of all IT developments as a means for opening up to the world.”

He added, “We need to create a contemporary society where all responsible parties, including us as an integrated business solutions company, work together to create an IT infrastructure in schools to enable Jordan’s students and teachers to easily utilize the tools of this modern age in order for us to become a model for success and excellence. At Optimiza, we lend the education sector special care as we believe in its importance in building a prosperous future and a solid generation.”

It is worth noting that this ongoing cooperation between Optimiza and MoE dates back to 2002, through the National Computer Company that has been acquired by Optimiza, making this project its fifth tender, and the first major tender granted to Optimiza by the MoE through its strategic partnership with Acer International, due to Optimiza’s extensive experience in implementing major and key tenders and projects in the different verticals it operates in, particularly education.