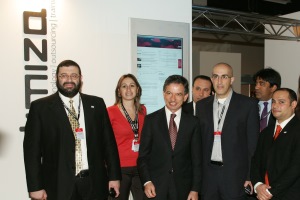 Amman, March 2008 – In recognition of the importance of keeping abreast with the latest developments in the world of technology, and in accordance with its strategy that aims at achieving complete customer satisfaction, Optimiza (Al-Faris National/ ASE:CEBC) is enhancing its effective strategic partnership with Microsoft in order to add the latest and most innovative developments to its services.

A Microsoft gold certified partner whose partnership with Microsoft started during the mid 90’s, Optimiza has been providing customers with all Microsoft programs and applications at a high level of quality and efficiency. This partnership bore fruit with a number of exceptionally successful projects Optimiza implemented locally and internationally through Microsoft products, most importantly the “Three Gorges Dam” Project, where the largest dam in the world on the Yellow River in China was constructed. AlliedSoft, an Optimiza company, was selected to develop the project’s Process Management Information System (PIMS), which is built using Microsoft Technology including: Microsoft’s Visual Studio 2003 and SQL Server 64-Bit technology.

Mr. Kamal Hazboun, Optimiza Chief Technology Officer, expressed his pride in Optimiza’s partnership with a leading global company like Microsoft and said, “For years now, Optimiza has worked side by side with Microsoft, driven by the vision to provide the market with cutting-edge IT solutions and applications. We have already adopted the three new technologies that were launched recently and we are looking forward to the successful results they will achieve. I believe that they will bring about a strategic and transformational change in the IT sector worldwide.”

For his part, Mr. Zeid Shubailat, Microsoft Jordan Country Manager, expressed his satisfaction with Optimiza’s professional and skilled performance in delivering Microsoft solutions to a wide array of clients and said, “Through working with our partners, it is always our goal to improve and build on our technologies. We are proud of our partnership with Optimiza, who has been instrumental in delivering our programs and achieving tangible and successful results for us as well as for our clients.”

In a significant development in the IT market, Optimiza has adopted Microsoft’s latest products which were launched in Amman on March 11 during their historic event: “Heroes Happen Here” where Optimiza was the exclusive platinum sponsor. The new products were: Windows Server 2008, which is by far the most advanced server operating system; SQL Server 2008; and Visual Studio 2008.