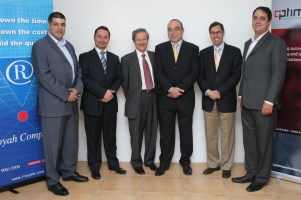 Amman June 2008 – In a press conference held on June 15, Optimiza (Al Faris National Company / ASE:CEBC) announced the acquisition of 70% of Royah a Saudi Company, specialized in the Development of Systems Integration and implementation of Oracle solutions being one of the largest Oracle Certified Advantage Partners in the Kingdom of Saudi Arabia. Al Malaz Group, previously the sole owner of Royah, will continue to hold 30% of the company’s shares. By virtue of this strategic agreement, the operations of both companies in Saudi Arabia will be merged to form a single cohesive entity.

As part of its integration and consulting services, Royah designs and implements large IT systems delivered by a professional team of consultants and specialists. These services include consulting, Work Structure Reengineering / Business Process Reengineering, Implementation, Upgrading, Migration, Integration, Customization and Post-implementation Support for IT systems. In 2007 the company, that has affiliations with international companies such as Oracle, HP and Intermerc, has been able to achieve impressive profits and financial results.

This agreement comes as part of the strategic cooperation between Al Malaz Group and Optimiza; one that focuses on investing in the IT and consulting sectors in the Middle East region and the KSA in particular, in response to the market’s growing needs.

Al Malaz Group enjoys a leading position in the region, highlighted by its investments in the IT sector. These investments include several companies, one of which is Royah. In addition, Al-Malaz Group manages a 250 Million Saudi Riyal ICT-specialized investment fund.

Dr. Abed Al Alziz Al Jazzar, Executive Partner of Al Malaz Group, expressed his pride in the partnership with Optimiza, as well as his trust in the capabilities of the management and leadership teams of both Optimiza and Royah in achieving the goals set out for growth in the Saudi and Gulf markets.

From his side, Mr. Rudain Kawar, Chairman of Optimiza said: “This investment of USD 13 million is a continuation of Optimiza’s strategy for expansion in the Kingdom of Saudi Arabia, adding to the previous acquisitions of Aregon Consulting and G-Tech in 2007, combined, the three companies will contribute to more than 55% of Optimiza’s revenues to be generated from the Saudi market”.

Furthermore, Mr. Hazem Malhas, CEO of Optimiza, expressed his pleasure at this accomplishment by saying, “Optimiza’s team is proud of this milestone; today’s accomplishment reflects the realization of our vision of growth and expansion in the Gulf region, to enable us to serve our clients’ needs and requirements. We believe this merger will noticeably increase Optimiza’s strategic presence in one of the fastest IT markets in the world, bringing Optimiza’s total professional workforce to 550 engineers and consultants, 200 of which will be located in Saudi Arabia.

Mr. Hussam Al Deen Al-Mabrook, CEO of Royah said: “This transaction provides added value, depth and strength to Royah’s capabilities to implement large-scale projects in the Gulf, bolstering existing services in the fields of IT and consulting in the telecommunication, banking, insurance, distribution, industry, healthcare, education and the government sectors, all of which are areas of expertise available at Optimiza. This partnership falls in line with our strategy that aims at reinforcing our market position, by utilizing the knowledge and expertise present at both Royah and Optimiza to offer a consolidated and comprehensive services package to all Arab markets”.

Established in 2001, Royah achieved successes in a host of sectors, most notably those related to the government, given the attention that has been concentrated on e-government programs. The company has delivered unique technical services and support programs to a distinguished list of clients including, Jeddah Municipality and Saudi Foreign Ministry in the government sector, King Faisal Specialist Hospital (KSA) in the healthcare sector, and Saudi Telecom Company, Mobili, Arabsat as well as MTN Yemen in the telecom sector, in addition to a group of industrial institutions most notable of which are Savola Group and Al Marai Company.